On the Friday before the accident, Senna's protegé, Rubens Barrichello, driving for the Jordan team, clipped a curb and crashed heavily at 140 mph (230 km/h) at the Variante Bassa chicane. Senna got out of his Williams car and went to the Medical Centre. Minutes after the accident, Barrichello regained consciousness and found Senna looking over him. After learning Barrichello had survived, Senna returned to his car and continued his practice session.

After the session concluded, he left his car and went to the Williams motor home to attend pre-arranged interviews for the press and told the attending journalists to wait one hour while he was checking car problems with his engineer, David Brown. Following the interviews, Senna continued his work with Brown for another two hours. Once he arrived back to his hotel in Castel San Pietro, Senna reportedly telephoned his girlfriend Adriane Galisteu and broke down into tears while recounting Barrichello's accident earlier that day.

On Saturday morning, Senna set a personal best time of 1m 22.03 seconds and agreed with teammate Damon Hill that the car had improved. Having been released from the Medical Center, Barrichello told Senna he was flying back to England to watch the race on television.

In the afternoon, the second qualifying session began and 18 minutes into the session, Simtek driver Roland Ratzenberger struck the concrete wall on the outside of the Villeneuve curve at 314 km/h, as a result of a suspected front wing failure.After the impact with a concrete barrier, the car bounced off and rested in the middle of that section of the track. Senna saw the replays of the accident and rushed into the pitlane to get inside a course car. When he arrived, with Ratzenberger taken into an ambulance, Senna inspected the damaged Simtek. He then attended the circuit's Medical Centre where he learnt from friend and neurosurgeon Sid Watkins that Ratzenberger had died. When the two left the center together, Watkins told the inconsolable multiple-time world champion that he did not have to race ever again and suggested to Senna that he withdraw from the race and go fishing with him. Senna responded by telling Watkins he could not stop racing and then went back to the Williams garage, where he summoned Patrick Head and Frank Williams, telling them of the situation and deciding to withdraw for the remainder of the Qualifying session.

Reportedly, Senna retired to his motor home where he broke down in tears and collapsed onto the floor. This had concerned Williams, who asked Betise Assumpção to arrange a meeting to discuss Senna's emotional state. Senna decided not to attend the post-qualifying press conference, leading the FIA to discuss but decide not to take disciplinary action against him. On the following day, however, Race Stewards called Senna out of his motor home to discuss his having commandeered a course car to visit Ratzenberger's crash site. A row ensued and Senna stormed off in disgust. The Stewards decided to take no action.

On Sunday morning, Senna was the fastest in the warm-up session by nine tenths of a second. Afterwards he spotted former McLaren rival Alain Prost sitting at a table. They talked together for 30 minutes, with Senna lobbying for Prost's help to improve the sport's safety, both agreeing to meet before the Monaco Grand Prix.

Next, Senna filmed an in-car lap of Imola for French television channel TF1, where he greeted Prost now working as a presenter for that channel: "A special hello to our dear friend Alain. We all miss you, Alain." Prost said that he was amazed and very touched by the comment.

At the drivers' briefing, Senna attended along with Gerhard Berger. Since he was unwilling to speak out due to the earlier row with race officials that had left him still fraught with emotions, Senna asked Berger to raise his concerns about the pace car's presence during formation lap, which had no role other than to promote the then latest Porsche 911. At the San Marino Grand Prix, this pace car was thus made to leave the grid in advance of the Formula One cars, instead of together.

Senna then met with fellow drivers to discuss the re-establishment of a drivers' group (the Grand Prix Drivers' Association) in an attempt to increase safety in Formula One. As the most senior driver, Senna offered to take the role of leader, starting with the next race event in Monaco. Niki Lauda suggested that Senna lead the group because of his strong personality, relative to the other drivers. 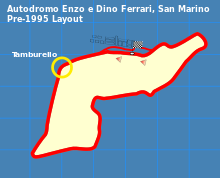 A map of the circuit per 1994 layout, with the Tamburello corner encircled.

At the start of the race, Pedro Lamy and JJ Lehto were involved in a serious accident spraying debris into the crowd and injuring bystanders. Track officials deployed the Opel Vectra safety car, driven by Max Angelelli, to slow down the field and allow the removal of debris. The competitors proceeded behind the safety car for five laps. As the Vectra was based on a family sedan and not relatively fast, Senna had pulled alongside the Vectra to gesture to its driver to speed up; this car was subsequently regarded as inadequate for the role (due to the fact that its brakes had overheated and thus had to be driven slowly, lest itself be the cause of an accident) and a cause of the alleged drop in tyre pressures of the following Formula One cars. Before the sixth lap, David Brown told Senna via pit-to-car radio that the safety car was pulling off, and Senna acknowledged the message.

On lap 6, the race resumed and Senna immediately set a quick pace with the third-quickest lap of the race, followed by Schumacher.

On lap 7, the second lap at racing speed, Senna's car left the racing line at the 190 mph Tamburello corner, ran in a straight line off the track and struck an unprotected concrete barrier. Telemetry shows he left the track at 310 km/h (190 mph) and was able to slow the car down by braking, and downshifting twice, to 218 km/h (135 mph) in slightly under 2 seconds before hitting the wall. The car hit the wall at a shallow angle, tearing off the right front wheel and nose cone and spinning to a halt.

After Senna's car stopped he was initially motionless in the cockpit. After about ten seconds, as recorded by the close-up aerial footage, his head was seen to lift to the left before returning to its original position. Thereafter he did not move again. What appeared to have happened was that the right front wheel shot up upon impact and entered the cockpit, striking the right frontal area of his helmet. The violence of the wheel's impact pushed his head back against the headrest, causing fatal skull fractures. A piece of suspension attached to the wheel had partially penetrated his Bell M3 helmet and caused trauma to his head. In addition, it appeared that a jagged piece of the upright assembly had penetrated the helmet visor just above his right eye. Senna was using a medium-sized (58 cm) M3 helmet with a new "thin" Bell visor. Any one of the three injuries would probably have killed him.

After the crash it was immediately evident that Senna had suffered some form of injury, because his helmet was seen to be motionless and leaning slightly to the right. The subtle movement of his head in the seconds that followed raised false hopes. Moments after the crash, Angelo Orsi, a photographer and a friend of Senna, took photographs of Senna in the car after his helmet was removed and Senna being treated before marshals blocked his view. Despite receiving numerous offers, the photographs have only been seen by Orsi and the Senna family, who insisted that Orsi not publish the photographs.

Fire marshals arrived at the car and were unable to touch Senna before qualified medical personnel arrived. Senna was pulled out of the car minutes after the accident. Television coverage from an overhead helicopter was seen around the world, as rescue workers gave Senna medical attention. Close inspection of the area in which the medical staff treated Senna revealed a considerable amount of blood on the ground. From visible injuries to Senna's head, it was evident to attending medical professionals that he had sustained a grave head trauma. An emergency tracheotomy was conducted alongside the track to establish a secure airway through which the medical personnel could artificially maintain his breathing. The race was stopped one minute and nine seconds after Senna's crash. Williams team manager Ian Harrison went up to race control, finding a scene where many race officials were sensing that Senna's crash had been serious. Bernie Ecclestone later arrived in race control to calm the situation.

Professor Sid Watkins, a world-renowned neurosurgeon, Formula One Safety Delegate and Medical Delegate, and the head of the Formula One on-track medical team, performed the on-site tracheotomy on Senna.

He looked serene. I raised his eyelids and it was clear from his pupils that he had a massive brain injury. We lifted him from the cockpit and laid him on the ground. As we did, he sighed and, although I am not religious, I felt his spirit depart at that moment.

Watkins cleared the respiratory passages, stemmed the blood flow, replaced blood lost from the accident and immobilized the cervical area. Watkins radioed for a medical helicopter and asked the intensive care anesthetist, Giovanni Gordini, to escort Senna to Maggiore Hospital. Approximately 10 minutes after Senna's crash, a miscommunication in the pits caused a Larrousse car piloted by Érik Comas to leave the pit lane and attempt to rejoin the now red flagged Grand Prix. That incident with Comas was spotted by Eurosport commentator John Watson as the "most ridiculous thing I've ever seen at any time in my life". Frantic waving by the marshals at Senna's crash site prevented the Larrousse from risking a collision with the medical helicopter that had landed on the track.

Senna's car was eventually lifted onto a truck and returned to the pitlane where officials impounded it. However, an unidentified person insisted that the black-box data carried on the car should be removed. At 3:00pm, the helicopter landed in front of the Maggiore Hospital. Doctors rushed Senna into intensive care; a brain scan confirmed the diagnosis made on the track. At 3:10pm, Senna's heart stopped beating, doctors restarted his heart, and he was placed on a life-support machine. Senna's brother Leonardo arranged for a priest to perform the last rites which occurred at 6:15pm. Senna's heart stopped beating at 6:37pm, and it was decided not to restart it. Doctor Maria Teresa Fiandri, the emergency department head physician at the hospital who was off-duty and had been watching the race live from home with her sons, immediately left for the hospital and arrived at the same time as Senna's helicopter landed some 28 minutes after the crash. In her interview after 20 years, she confirmed that the blood loss suffered by Senna was due to a damaged superficial temporal artery and that, apart from his head injuries, Senna appeared serene and the rest of the body was intact. Dr Fiandri became responsible for providing medical updates to the media and public that had amassed at the hospital and, at 6:40pm, she announced that Senna was dead.

It was later revealed that, as medical staff examined Senna, a furled Austrian flag was found in his car—a flag that he had intended to raise in honor of Ratzenberger after the race. This is the last steering wheel used by Ayrton Senna before his tragic death in Imola on Sunday 1 May,1994. He used this steering wheel on the Friday 29th, May and Saturday 30th, May 1994 while testing the Williams FW16.
The testing and qualifying have been high in events...

This steering comes with COA